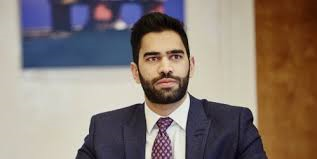 Bilal, who graduated from Bishop Vesey’s in 2010, now works as a Civil Engineer for BP, and discussed his incredible journey from leaving the school to working for one of the biggest energy supplying corporations in the world.

The networking event, which took place in Bishop Vesey’s new STEM building, allowed partners to enjoy an initial half hour of networking in the stylish foyer area, before settling down to listen to Bilal’s talk.

Bilal discussed his involvement with past fundraising projects alongside the school, before sharing his unique story which has led to him working in London, Norway and Azerbaijan on one of the company’s biggest ever projects, ‘Shah Deniz 2’.

The project involves extracting natural gas from the floor of the Caspian Sea before transporting it across Europe to Italy – a route also referred to as ‘The Southern Gas Corridor’.

The talk captivated partners and sixth form students, who enjoyed the opportunity at the end of the session to ask Bilal questions about the energy industry and his personal journey.

The evening’s events concluded with a final half hour networking session, where members were treated to a buffet and refreshments, before exchanging business cards and making their way home for the night.

Corporate Partnership Development Director, Brian Davies, commented: “After a successful networking event at Walmley Golf Club in September, we wanted to carry on the momentum and offer our partners another insightful experience.

“Bilal has been extremely successful since leaving Bishop Vesey’s, and his inspiring and interesting story never fails to capture the imaginations of both students and business professionals.

“The event was also a fantastic opportunity to showcase the school’s new STEM block, and it turned out to be a perfect location for the evening’s events.

“These sessions are absolutely crucial to promoting partner collaboration within the initiative, and that is why we’re introducing high-profile guest speakers to maximise the popularity of the events.

“We have more incredible guest appearances lined up for future networking events, with CEO of the Greater Birmingham Chamber of Commerce, Paul Faulkner, scheduled to speak at the next session at Moor Hall Hotel and Spa on Thursday 25 January.” Russell Lowe (OV2000) and MD of Lowe Sawyer Financial Planning has come on board as a Corporate Partner to not only help… More... Corporate Partner Eventmasters who ran the silent auction at the recent Sports Dinner have offered the BVGS community a special offer for hospitality … More... Fellow Corporate Partners X2 Furniture and Millennium Point have been collaborating on a project to offer better acoustics to their Auditorium. More...